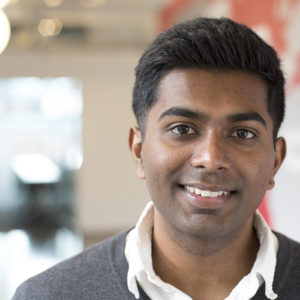 My undergrad was tailored around getting into pharmacy school, which I got into, but it wasn’t my passion. I audited a few computer science classes at University of Washington and really liked them. Later, a friend who works at Amazon taught me Java. I realized I could combine pharma and CS.

I received the Washington State Opportunity Scholarship, which helped pay for college, but the word “opportunity” is really what it meant to me. Networking, support, resources. It’s how I learned about Northeastern and Align. And the Align Scholarship, which covered my first semester.

The biggest keys are the support of an established school and a physical campus, unlike online bootcamps, plus Northeastern’s network for co-op and jobs. Faculty are a mix of traditional professors and industry experts who have a different perspective.

My cohort is 27 students, which is small compared to UW. I was worried the other students would know a lot already, but we’re all on the same playing field. It’s nice to see the diversity in backgrounds. Teachers and TAs are always available to help, too. Really feels like a community.

Each student takes a different path to—and through—the Align Master’s Program. Explore their stories, then start your own.